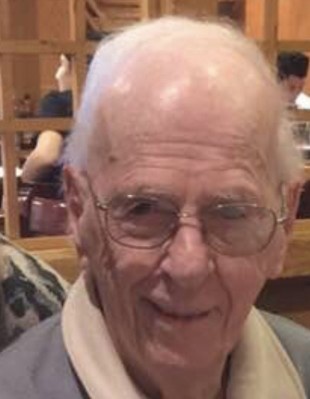 A. Russell Shearing passed away at 95 on December 26, 2020 at Goodwill Retirement Home, Grantsville, Maryland. He was born on March 9, 1925 in Taunton, Massachusetts to Alfred C. and Gertrude Shearing and was the last member of his immediate family. He was preceded in death by his son Stephen at 18, daughter Linda Cormack at 48, and his wife Lora at age 90. He and his wife were together for 66 years, dating 9 months and being married for 65 years and 3 months. They enjoyed much world travel, visiting 28 countries, they played golf together, where she was much more than good, and they enjoyed just being together. It was his wife’s belief that they would be reunited.
He is survived by his and Lora’s loving longtime friends, Paul and Vicki Green, whom they thought of as their daughter. Additionally, he is survived by his several years fiancée Gloria Bryant and her loving family. He is also survived by nephew Jeffrey Faria and wife Cheryl, nephew Joseph Faria, and niece Joyce Edmond.
He served in the U.S. Marine Corps for 37 months in the South Pacific during World War II and saw action in Sinian, Tinian, Guam, and Okinawa, earning the rank of Staff Sergeant.
He retired as Director of Sales and Marketing at Kelly-Springfield Tire Company after 44 years in the Goodyear Tire family.
He was active in Bethany United Church of Christ in Cuyahoga Falls, Ohio, Saint Matthews United Church of Christ, Cumberland, Maryland, and Cherry Grove Church, Grantsville, Maryland.
Private interment will be at the family cemetery in Wooster, Ohio where he and Lora moved after retirement to be near their daughter.

To order memorial trees or send flowers to the family in memory of A. Shearing, please visit our flower store.