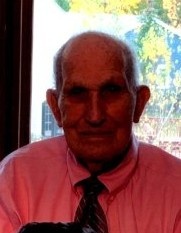 Donald R. Smith, 86, of Ashland, died Wednesday, January 8, 2020 at his daughters home, following a short-term illness and surrounded by his loving family.

Donald was born July 2, 1933 in Ashland to Wallace and Gertrude {Hall} Smith.

After his time with the Navy he began working for General Motors in Ontario where he retired after 39 years of service from 1956-1996.  He was a skilled handyman and built the home in which his family lived. Donald was a member of the North End Church of Christ in Ashland.  He enjoyed music and conversation with friends and family.

Friends may call Saturday from 10 to 11 a.m. at Roberts Funeral Home-Ashland Chapel.  Services will follow at 11 a.m. at the funeral home with Minister Darren Adkins officiating.  Burial will be at Ashland County Memorial Park, where military rites will be held.   Online tributes may be made at www.RobertsFuneralHome.com.   Memorial contributions may be made to Hospice of North Central Ohio at 2050 Dauch Dr, Ashland, OH  48805.

To order memorial trees or send flowers to the family in memory of Donald Smith, please visit our flower store.