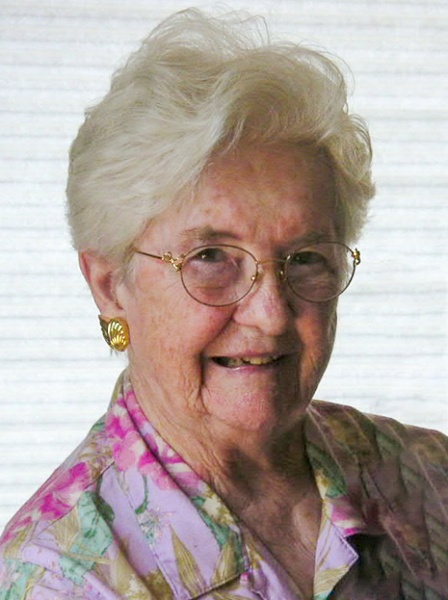 Frances E. Mumaw, 99, of Westerville, died Friday, November 20, 2020 at Mount Carmel St. Ann’s Hospital in Westerville. Entombment will be at Sherwood Memorial Gardens, Wooster. Roberts Funeral Home – Sherwood Chapel, Wooster is handling arrangements. A memorial service will be held at a later date.  Online tributes may be made at www.RobertsFuneralHome.com.  Memorial contributions may be made to Wooster Salvation Army (437 South Market Street, Wooster, 44691) or Friendship Village of Columbus (5800 Forest Hills Blvd., Columbus, Ohio 43231).

Frances was born September 3, 1921 in Carrollton, Ohio to Jay and Lura {Marshall} Blazer. She graduated from Carrollton High School in 1939, then took courses in typing and shorthand and got a job at the Timken Company in Canton, where she met Art Mumaw. They were married on February 2, 1946, after he returned from WWII, and moved to Creston so Art could take a job at the Packaging Corporation in Rittman.  While their children were growing up, she helped out as a scout leader, was very active in her church circle and prepared church dinners for different events.  Frances was a complete homemaker who gardened, canned, preserved food and made legendary pies and cinnamon rolls. She and Art enjoyed bridge and golf together.  When the kids were older, she went back to work in the post office at the College of Wooster.  She enjoyed interacting with the college students and going to Scots basketball games.  She often brought home hungry college students for a large home-cooked meal. She served others unselfishly as a member of the United Methodist Church of Wooster and Mother’s Cum Laude Club, Life member of the Wooster Community Hospital Auxiliary, and Charter member of the Salvation Army Women’s Auxiliary.  She moved to Friendship Village in Columbus in 2003 to be near her daughter and grandchildren.

To order memorial trees or send flowers to the family in memory of Frances Mumaw, please visit our flower store.