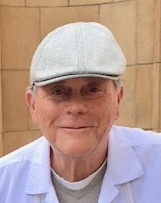 In 1958 he joined the United States Army, serving mostly in Germany.

He spent 40 years at Columbus and South Ohio Electric Co (American Electric Power) as an accounting supervisor.  Upon retiring they moved to Apple Valley.

Lou and Sue were founding members of Peace Lutheran Church in Canal Winchester, where they maintained membership.  Lou was a member of the Lions Club, and worked with Indian Guides both of Canal Winchester.  He was an avid gardener, loved to swim, but always put his family (and dogs) first.

Lou was preceded in death by his parents, and siblings.

Private Burial will be at Mount Vernon Memorial Gardens. Online tributes may be made at www.RobertsFuneralHome.com.   Memorial contributions may be made to Crossroads Hospice 3743 Boettler Oaks Drive #E, Uniontown, Ohio 44685

To order memorial trees or send flowers to the family in memory of Frederick Bauer, please visit our flower store.