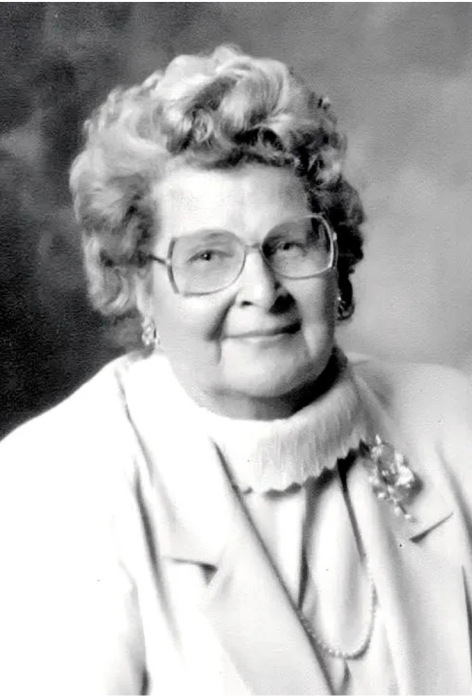 Hazel Margaret Gerbig Stoll was born on January 15, 1925, in Western Star, Ohio, to George Gerbig and Ida Edgel Holden Whitaker Gerbig.  She was the third child of six in the issue of that marriage, but sixth in a blended family of nine.  Her father was a stone mason and her mother a religious woman who ran a tight ship and raised most of the family produce on the Western Star farm.  At sixteen years, she met Carl Victor Stoll at a baseball game, where he was pitching.  Within a few months, they married on November 22, 1941.  They lived with his parents on the Stoll Family Farm in Marshallville for a few months, until Carl took a farming position with George Onslager, a well-known rubber chemist with Goodyear and who was ahead of his time in fertilizer usage.  Carl and Hazel lived on the Sharon Center Onslager farm for several years.  In that period their son Gerald Ray was born.  In 1946 Carl and Hazel purchased the Stoll Family farm at 8798 Mt. Eaton, Marshallville, and their daughter Sharon Kay was born the same year.  Carl and Hazel farmed together for 63 years - first at the Marshallville site for 11 years, nine years at the Twin Lakes Farm on Sousa Street in North Lawrence, and then back to the Marshallville farm for 43 years.  At the Marshallville farm in 1970, they established Y&S Crop Service, a fertilizer and seed company which was very successful with Hazel running the fertilizer mixer and Carl doing applications.

Hazel was an active member of the community in Marshallville.  She was a member of the Evangelical United Brethren Church where she taught Sunday School and then became a member of St. Michael’s Church of Christ.  She was a girl scout leader in Marshallville for many years and was an active member of Mothers’ Club II throughout its tenure.  Mothers’ Clubs were groups of women who met and shared advice on housekeeping and parenting skills.  She was the president of the Parent-Teacher organization of Marshallville elementary, a heroic task since she never finished the tenth grade and suffered from dyslexia.

She outlived all her family, all of Carl’s family, and all her own generation of friends.  She had a most amazing life filled with a husband who loved her for over 68 years.  Carl passed in 2009.  She and he farmed, traveled, developed properties, and established a summer get away, The Half A Day Farm on Seneca Lake in southern Ohio.   She never lacked for projects to do or adventures to enjoy. She passed this life on May 19, 2022, age 97 years, four months, and four days.

She is preceded in death by husband, her parents, her half-brothers Frank and Blaine Whitaker, and Wallace Gerbig, siblings, Juanita Latham, Erma Sheeler, George Gerbig, Gene Gerbig, and Donald Gerbig.

Private services will be held this summer on the family farm. Donations in her honor can be given to St. Michaels’ Church of Christ, Marshallville, Ohio, Pastor Joseph D. Routh.

To send flowers to the family, please visit our floral store.

To order memorial trees or send flowers to the family in memory of Hazel Stoll, please visit our flower store.