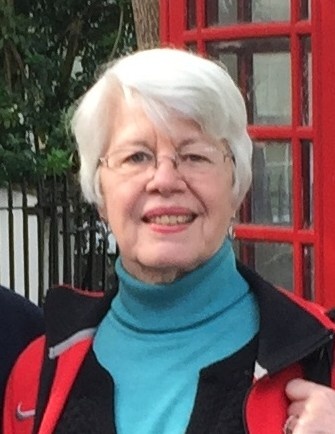 Born in Boston, Massachusetts on May 5, 1938 to Janet Urie and Dr. Stanley O. Hoerr, whose medical career took the family from Boston to Columbus and, finally, to Cleveland, Ohio.

A graduate of The Laurel School, in Lyndhurst, Ohio, Joan went on to attend Wellesley College, graduating in 1960 with a degree in mathematics. In Wooster Joan was an early member of the Interfaith Housing Committee and a participant in many local political and school campaigns.

Joan met and married Hayden Schilling, then a history graduate student at Vanderbilt University, who worked summers at the Red Oak Camp in Mentor, Ohio where her brother also worked. Joan and Hayden met at a camp social and shortly thereafter, became engaged and were married on December 29, 1959 in Lyndhurst. After the Christmas break each returned to their respective institutions, after which they took up residence in Cambridge, MA while Joan finished her courses at Wellesley and Hayden worked on his thesis at Harvard’s Widener Library and the Boston Public Library. During her husband’s Fulbright year in London, 1962-1963, Joan worked at the United States Trade Center in London. Returning home in 1963, Joan and Hayden spent a year in Clemson, South Carolina before moving to Wooster, OH where they have resided ever since.

Joan and Hayden have two children, Kathy and David, and two grandchildren, Erik and Alexis. Kathy has degrees from both Lewis and Clark College and The College of Wooster. She married Jeffrey Lindberg, professor of Music at The College of Wooster, in 1990. She is presently a board-certified music therapist in Wooster. David graduated from Denison University where he majored in economics and subsequently received a Master’s degree in sports management from The Ohio State University where he has spent a number of years as an assistant men’s tennis coach. David has also been the head coach of men’s tennis at Kenyon College. This fall David returns to his undergraduate Alma Mater of Denison University as head men’s tennis coach.

In Wooster Joan was employed as an indexer at the Micro-photo Division of Bell and Howell where she was responsible for helping to index a number of regional and national newspapers; and had her Index to the New York Times Watergate Collection published. When Bell and Howell moved to Ann Arbor, Michigan, Joan remained in Wooster where she created her own indexing practice of years indexed numerous regional and national publications as well as the indexes for many Wooster faculty members’ monographs.

A loving wife to Hayden, mother to Kathy and David and grandmother to Jon Erik and Alexis Marie Lindberg, Joan is greatly missed by her family and those who knew her. The family wishes to express their deepest appreciation to Ohio's Hospice LifeCare Hospice and the surrounding medical community.

A date for a Celebration of Life event will be announced shortly. Roberts Funeral Home-Sherwood Chapel is assisting the family with arrangements.  Online tributes may be made at www.RobertsFuneralHome.com

To order memorial trees or send flowers to the family in memory of Joan Schilling, please visit our flower store.