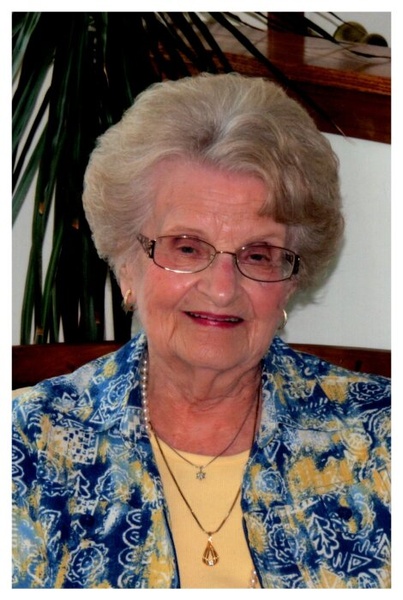 Loraine E. McFadden, 98, of Ashland, entered into the arms of her Lord and Savior, Jesus Christ, Tuesday, July 20, 2021 at Lutheran Village.

Loraine was born July 16, 1923 in Carter County, KY to Ralph Lee and Dora Julie {Erwin} Fannin. The oldest of three girls, Loraine became the main caretaker of her sisters upon the death of her mother in 1932. Life was difficult during the depression years, but Loraine handled it with unbelievable strength and dignity. It molded her belief of “Family First.”

Loraine was married for a short time at a young age and became the mother of two boys; Conrad E. and Steve J. Kaiser. Then in 1943 she decided to leave her beloved Kentucky and move to Mansfield, Ohio to seek work and a new life. It was there she became a “Rosie the Riveter” during WWII, helping to manufacture airplane parts for the war effort at the Mansfield Tire Co. While working there she eventually met William “Whitey” McFadden and they married in 1946. They had two daughters; Cynthia H. (Russell) Cutlip and Kristi K. (Chester) Woodward and enjoyed 52 years of marriage, until Whitey’s passing in 1998.

Loraine was a stay-at-home mom for many years. When all the kids were in school she took a part time job at the Home Company Department store in Ashland, working in the hosiery dept. In the mid 60’s Whitey and Loraine embarked on a new adventure by deciding to become restaurant owners. With local support, much grit and faith, they started Perkins Family Restaurant (FKA Perkins Pancake House) beginning in Savannah, Ohio in 1965 and in Ashland in 1967. So many wonderful people graced their lives as employees and customers during that time and many became lifelong friends. It was a highlight in their life, for sure. They retired in 1990 with the hope to travel and enjoy their next chapter.

Loraine was preceded in death by her parents, husband William, sons Conrad in 1978 and Steve in 2018, as well as her two sisters Gladys Snider and Madge Byrd, son-in-law Steven M. Burns, and grandsons-in-law Jeremy D. Burkepile and Greg Coleman.

Friends may call Thursday from 6 to 8 p.m. at Roberts Funeral Home-Ashland Chapel, Ashland. Services will be Friday at 11 a.m. at the Ashland Church of Christ with Minister Tim Nowlin officiating. Burial will be at Ashland County Memorial Park. Online tributes may be made at www.RobertsFuneralHome.com. Memorial contributions may be made to Ashland Church of Christ, 1185 County RD 1356 Ashland, Ohio 44805 or Kindred Hospice, 112 Hedstrom Dr. Ashland, Ohio 44805.

The family would like to extend a special thank you to the Lutheran Village for their sincere loving care of Loraine for the last four years.

To order memorial trees or send flowers to the family in memory of Loraine McFadden, please visit our flower store.