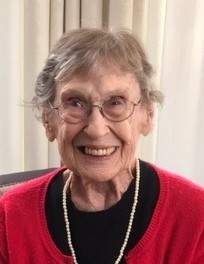 Margaret was born January 4, 1921 in Birmingham, AL to William B. and Lillie {Barrett} Patterson.

Margaret worked for San Diego Public Schools, Higbees in Cleveland, and finally for Westinghouse Electric Corporation of Pittsburgh retiring in 1983.

She was a 50 plus year member of the Pleasant Hills Community United Presbyterian Church, was an avid gardener, and a Junior Achievement Mentor.

Margaret will be deeply missed by her daughters Linda (Jeff) Hultman and Laura (John) McCord all of Palm Desert, CA, son Jim Neff of Pittsburgh, PA as well as six grandchildren.

Margaret was preceded in death by her husband Harold, son Bill Neff, and sisters Mary Elizabeth Clark and Nina Dibrell.

Roberts Funeral Home-Sherwood Chapel, Wooster is assisting the family with arrangements.  Burial will be at Jefferson Memorial Gardens in Pittsburgh, PA at a later date.

To order memorial trees or send flowers to the family in memory of Margaret Neff, please visit our flower store.