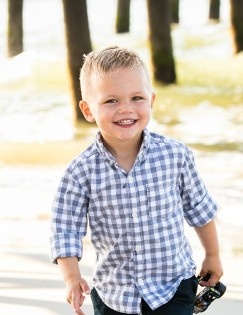 Reid Lee Webster, 6, of Wooster, OH died on October 10, 2020 at his home following a heroic one year battle with an undiagnosed neurodegenerative condition that presented at the end of his frontline treatment for acute lymphoblastic leukemia. He passed in his backyard in the arms of his dad and mom after spending the day experiencing many of his favorite things one last time.

A funeral mass will be held at St. James Catholic Church in Kearney, Nebraska. and an interment will follow at the Kearney Cemetery.  A memorial and celebration of Reid’s life will be held in Wooster at a later date post-COVID.   Online tributes may be made at www.RobertsFuneralHome.com.   In lieu of flowers, memorial contributions may be made to the Reid Lee Webster Memorial Endowment Fund at the Wayne County Community Foundation in Wooster to benefit the preschool program at St. Mary of the Immaculate Conception School, which played a special role in Reid’s life leading up to and throughout his illness.

The strength Reid embodied was evident when he was born eight weeks premature on June 28, 2014 in Appleton, WI to Wayne and Sally {Bazata} Webster.  This challenging start was followed by four years of healthy, carefree living.   Reid covered a lot of ground in his short life and resided in Ripon, WI, Greeley, CO and Wooster.   Words which describe Reid’s personality best include: curious, diligent, resilient, observant, courageous and happy.  He had an amazing smile, infectious belly laugh, and radiated joy. Some of Reid’s favorite activities included snuggling in the morning, puzzles, LEGOS, flying paper airplanes, reading books and going to the library, taking stroller rides on The College of Wooster campus or downtown to the farmer’s market, golf, celebrating birthdays, exploring nature, playing in the bath tub, gazing at the moon and stars, trips to the playground (especially time on the swings), sharing his favorite part of each day at bedtime, and travel.  By far his favorite vacations were a Disney Cruise in May 2018 and a North Carolina beach vacation with his extended Bazata family in August 2018.   Reid also treasured many friendships in our neighborhood, at school, and at the pool. Other than his sister, his best friends were his cousins Bronson and Brooks.

Prior to his cancer diagnosis, he attended preschool at St. Mary’s (‘18/’19) and The College of Wooster Nursery School (‘17/’18) where he made many friends and learned his most proud educational accomplishment - writing his name.  In addition, Reid loved to talk (all the time!) and asked millions of questions.   The loss of hearing his sweet voice over the past year has been one of the things we miss the most about him.  We will forever think of Reid when we see his best bird friend, “Jack the cardinal,” his cherished Lovey, hear the song “You are my Sunshine,” watch the movie “Kevin” (aka Home Alone 2), and when we eat key lime pie, Caesar Salad or “gravy and bread” as he called it.   Above all else, Reid loved spending time with his sister and constant companion, Stella.  Together, they used their incredible imaginations to spend hours creating through both play and art.  They viewed every cardboard box as the ‘best find ever’ as each was full of unlimited play possibilities and there wasn’t anything they weren’t able to construct out of Magnatiles.  According to Stella, she will miss Reid’s “crazy chicken dance” the most as it showed his silly spirit.

Reid did not let his leukemia diagnosis in February 2019 get him down.  In fact, he shined even brighter throughout the course of his grueling cancer treatment.   The strength and positivity he exuded during his illness was inspiring to so many including his family, health care professionals, and support network. For a large portion of the past year, he worked diligently to regain his lost abilities, but sadly his body didn’t cooperate with that plan.   However, he remained in remission from leukemia at the time of his passing.   As a result of his diagnosis he got many special opportunities that he would likely not have had otherwise.  In addition to getting to spend LOTS of extra one-on-one time with his mommy and daddy (who love him so very much), he was especially proud of getting to dress in his favorite ‘golfer’ outfit to hit the first drive of the Cleveland Clinic Children’s golf tourney, being selected to demonstrate their new miniature electric cars for the news media, as well as having a baseball autographed by Carlos Carrasco during a clinic visit.  He largely viewed his many hospital stays and clinic visits as “fun,” due to the wonderful child life staff, art and music therapists, nurses and physicians who made him feel like a star.   These experiences truly highlighted his ability to thrive despite his cancer diagnosis and left us feeling so incredibly proud that he was our son.   Although we are grateful he is finally at peace, his passing leaves a significant hole in the lives of so many and we are all better for having known and loved him.

Left to treasure his memory and await the day we can see his smiling face again are his parents, sister and best friend Stella, and his two dogs Baxter and Brinkley of Wooster, OH.  Also remembering Reid are his grandparents, Ron & Mindy Bazata of Kearney, NE and Steve & Debbie Webster of Rocky Ford, CO.  Reid is also survived by uncle Scott and aunt Kiley Bazata; his cousins Bronson, Brooks, and Boone Reid; and uncle Rick Bazata, all of Kearney, NE.

We wish to thank everyone who came together to “Rally for Reid” during his illness.   From the caregivers at Nationwide Children’s Hospital, Cleveland Clinic Children’s Hematology/Oncology, Duke University Children’s Hospital, and Ohio’s Hospice Lifecare to all our friends, family, and neighbors near and far.  We also want to thank Father Stephen Moran, the St. Mary’s Church congregation, and especially The College of Wooster community.  Your kindness and generosity are appreciated more than you will ever know.   To honor Reid and our family, we encourage you to be present and appreciate every moment (both ordinary and extraordinary) that you share with your family and loved ones.   You truly never know how quickly life can change without any warning.

To order memorial trees or send flowers to the family in memory of Reid Webster, please visit our flower store.