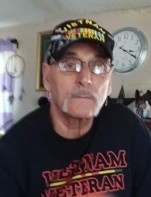 Celebration of life services will be held at later date. Burial will be at Ohio Western Reserve National Cemetery, where military rites will be held. Online tributes may be made at www.RobertsFuneralHome.com. Memorial contributions may be made to Wayne County Veterans, 356 W. North St, Wooster, OH 44691.

Bob proudly served in The United States Army during the Vietnam war. You could always see him wearing a Vietnam Vets hat and shirts.

He retired from Wooster Iron and Metal after over 40 years. Bob enjoyed the outdoors, going fishing, camping, and golfing with buddies.

To order memorial trees or send flowers to the family in memory of Robert Crawford, please visit our flower store.