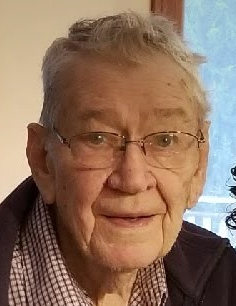 Friends may call Monday from 5 to 7 p.m. at Roberts Funeral Home-Sherwood Chapel, Wooster.  Funeral services will be Tuesday at 11 am at the funeral home with Rev. Richard Samide officiating.  Burial will be at Sherwood Memorial Gardens, where military rites will be held. Online tributes may be made at www.RobertsFuneralHome.com. Memorial contributions may be made to LifeCare Hospice, 1900 Akron Rd., Wooster, OH 44691.

William was born August 20, 1929 in Massillon, Ohio to Bert and Thelma {Brenner} Wright.

He graduated from The Ohio State University. William served in the US Army, 82nd Airborne during the Korean Conflict.

William was the Chief Building Official for the City of Wooster Division of Building Standards, retiring in 1995. He was a member of Central Christian Church. William was a member of the Elks Lodge and the American Legion Post #68. He was an avid gardener and liked to hunt and fish.  William loved to spend time with his family, including Saturday breakfast at the Elks Lodge.  He faithfully supported his granddaughter Mariah’s passion for horses.

William was preceded in death by his wife of 58 years, Philomena

To order memorial trees or send flowers to the family in memory of William Wright, please visit our flower store.